It is always a great pleasure to see the Dragon Tale Theatre Group’s annual pantomime and I went to their take on Rapunzel, held at Prudhoe Highfield Middle School from 30 October to 2 November inclusive, with a keen sense of anticipation.

I’m very happy to say that my expectations of this slightly less well-known pantomime were well exceeded.  This is Dragon Tale’s 20th annual production and the zest and enthusiasm which the group always shows was well in evidence again.

No panto would be complete without the ritual calls of it’s behind you and oh yes it is, oh no it isn’t but these were well integrated into the rest of the action.

Turning to the performances of individuals, the Scottish accent of Fairy Goodmore was very well sustained by Veola Maughan and her presence proved to be a calming influence, as well as one which helped to progress the plot.  Tahnya Tulip-Maughan and Abi Wathen played the King and Queen to perfection, bringing out both the humour and the underlying anxiety. I especially loved their playfulness in their Act 2 duet, You’re My Little Chu-Chi Face.

Wendy Neal played against type this time as the King’s evil sister, Mother Gothel, who has held Princess Rapunzel captive since shortly after her birth right up to the present day, which is the Princess’s 18th birthday.  She really did personify wickedness in her portrayal and hers was a performance full of power, both in delivering her lines and in singing.  Rapunzel herself was played by Samantha Macbeth, who both looked the part and acted and sang it in a quietly effective way but beautifully. Playing her lover and the pantomime’s principal ‘boy’ was Fiona Henderson as incompetent but ultimately reformed villain Quinn, who combined humour and sensitivity in another stand-out performance.  Mention must also be made of Quinn’s partner in crime Doyle, played with a well-sustained Irish accent and just the right amount of cynicism by Ray Moore

Much of the comedy in the show was provided by court jester Harold (Ben Rutherford-Orrock) and pantomime Dame Dorothy (Alex Neal).  Both together and separately they had a number of bring-the-house-down moments and really played as a team. I don’t know whether to marvel more at Alex’s exaggerated Geordie accent or Ben’s phenomenal energy but they both played a big part in the success of the show.

More comedy came from Bubel, a rather dotty servant working for Mother Gothel, who was played with outstanding dopeyness and a pleasant smile by Abi Neal, completing the Neal family line-up.  What a talented family they are.

I’m really sorry that I don’t have the space to name all those playing the more minor but no less essential parts.  I’ll just mention Mark Gate, who played a very British-sounding President Clive and brought a smattering of political humour to the line-up, and Ollie Scullion, who played several parts, notably that of the soloist in the first verse of Flash Bang Wallop, where his well projected voice showed that he can both sing and act.

All who took part in the ‘crowd’ scenes did extremely well.  The singing and dancing were of a very high standard indeed and, as I have said before, it is so good to see cast members acting all the time and not just when they have something specific to do.

As ever, Doug Younger and his small group of musicians provided unobtrusive but highly effective support by means of a variety of musical ideas.

Many others of the group undertook the wide range of jobs also needing to be done.  These included, in no particular order, tasks relating to sound, lighting, make-up, wardrobe, set design, scenery/props, setting up and down the stage and hall as a whole, front of house, selling tickets, transport, catering, use of social media design and production of programmes, photography and videography, as well as jobs needed to comply with the law, such as registration and chaperoning.

That these jobs had been done thoroughly was evident throughout.  Add to this the fact that I did not pick up a single missed line or wrong note and you have a highly successful production staged by a real team, as usual.  Producer Stuart Rutherford-Orrock is to be congratulated on bringing all the elements together so successfully.

The group is a member of the National Operatic and Dramatic Association (NODA) and there was a jewel in the crown moment at the end of the final performance when NODA Vice-President Gordon Richardson presented long service awards to several of those present.  10-year awards went to Sue Henderson and Fiona Henderson, with awards for 20 years being presented to Lorraine Lathan, John Robson, Linda Smart and Doug Younger. As NODA will aggregate service given to more than one of its member organisations, a 40-year award was presented to Jeannette Roper for services both to Dragon Tale and to the Phoenix Theatre, Blyth.

The group has announced that, as it celebrates 20 years in 2020, it will put on two productions.  There will be the usual pantomime production next October half-term and in addition there will be a production of the musical Oliver during the week commencing Easter Monday, 13 April.  More details will follow but for now put this into your diaries. 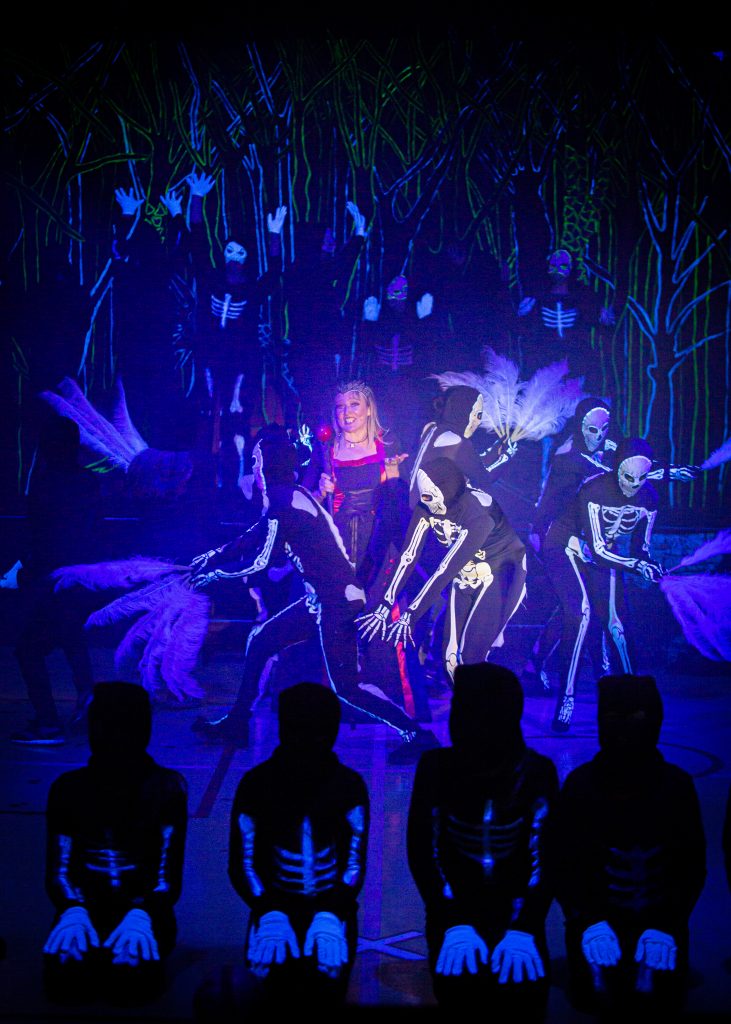