Rapunzel is just a vague recollection in the fairy tale section of my memory.  Specifically, I remember a pretty princess, with exceedingly long blonde hair held prisoner in a tall tower by a wicked witch.  After that my recollection is fuzzy and I suspect this version, by Warren McWilliams, takes considerable liberties with the original Brothers Grimm story.

Not to worry.  We have an impressive tower on stage, with a pretty blonde Rapunzel (Samantha Macbeth with two junior versions of herself) imprisoned within.  She keeps her long blonde, magic, hair separate from herself but immediately available when required to assist her ultimate rescuer to climb up when that time arises.  It turns out she is, in fact a princess, stolen at birth from the King and Queen (Tahnya Tulip Maughan and Abi Wathen) by the wicked  Mother Gothel (Wendy Neal) – boo, hiss – who uses Rapunzel’s magic aura to keep herself young and beautiful..

The scene is initially set by a pretty Fairy Goodmore (Veola Maughan), who pops up throughout to keep us abreast of developments and, ultimately, adds her magic to assist in Rapunzel’s escape.  There is no Prince Charming here but we have a reconstructed peddler/thief, called Quinn (Fiona Henderson) – part of a dubiously amusing double act – who takes on the Prince’s responsibilities with aplomb.

Meanwhile, in and around the Royal Castle there is a Jester called Harold (Ben Rutherford-Orrock) who, together with Dame Dorothy (Alex Neal), keeps the audience royally entertained.  I don’t think their antics add a great deal to the narrative but together they keep the audience amused throughout.  The ensemble, which surrounds them much of the time, is primarily made up of an enthusiastically large group of children plus a smattering of adults.  Most of the ensemble also have small, named parts so it’s quite complex calculating how many are involved but I believe there are about 44 enthusiastic participants.

Everyone plays their respective parts with total commitment and helps sweep the audience along.  A small group of four musicians also helps keep proceedings on track, performing a selection of appropriate, if mostly unfamiliar (to me) numbers.  Those songs are, however, performed with commitment by ensemble and principals alike. As always with Dragon Tale, it must have been something of a challenge to manoeuvre such a large, mostly very young cast.  The Company, however, pulls it off with considerable style, providing a thoroughly enjoyable evening’s entertainment.  As ever, they supply the Prudhoe area with a colourful, amusing entertainment with which to celebrate their 20th anniversary this year.  I look forward to seeing their first musical (Oliver) around Easter

Councillors comment:
I had the pleasure of attending on the last performance of the run, being highly amused by the antics on stage and the opportunity to present 260 years worth of NODA long service awards to worthy recipients on this their 20th birthday – It was my first visit to Dragon Tale – I sincerely hope it is an experience I will renew as they enter their 21st year 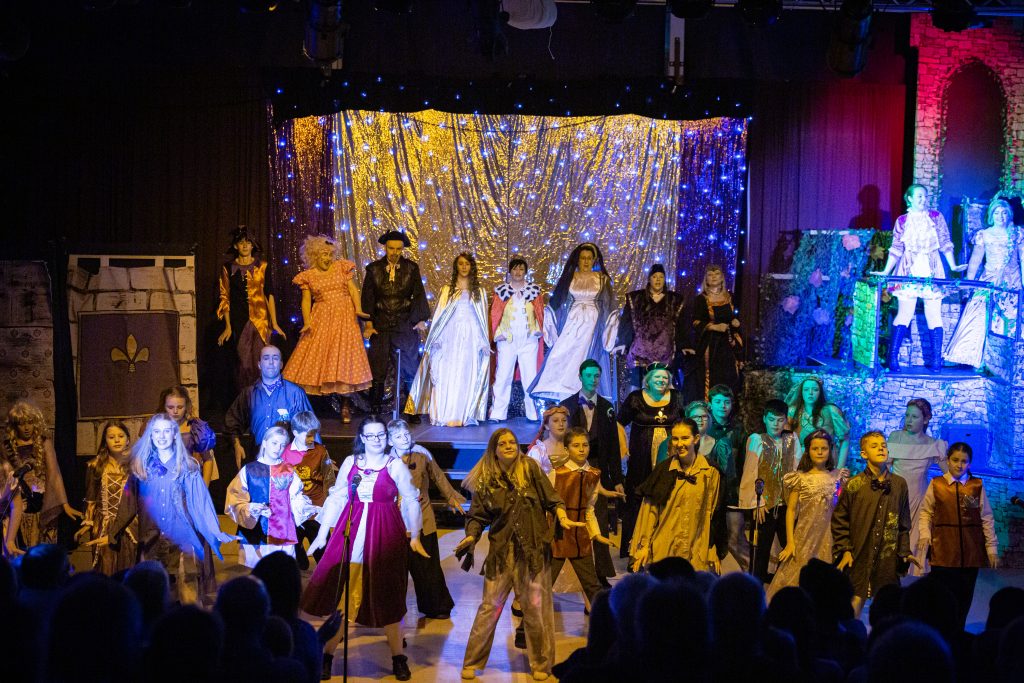