We all had a fab time this Friday at the registration evening for Oliver! at the Glenside, Mickley.

We also took the time to celebrate the successes of Rapunzel and the fantastic team work our cast and crew have demonstrated over the last 6 months. What we didn’t tell our members was that we were also going to present 7 awards to members of the group who have really stood out this year. The committee had an incredibly difficult time choosing the winners of this year’s awards; there were many very worthy nominees for each!

The Unsung Hero Award is named after Janet Rowlands, one of our founding members. Janet was well known for taking many comedy roles and had a real talent for perfect comic timing. She was creative, funny and meticulous in her characterisation; regardless of the size of the role, Janet gave it her all. With that in mind, we wanted an award that values all of these characteristics for somebody with a similar on-stage presence. Our first award winner became involved with the group in 2011 in Alice in Wonderland and he has returned yearly since. Over the past 9 years, he has blessed our group with his brilliant presence as a confident comic performer, well-known for his array of accents and  for developing his characters far beyond what is written in the script. We are thrilled that he is a member of Dragon Tale and the hours of commitment that he affords us as a group is admirable. Always the first one to learn his lines, always looking to solve problems, and an important constant presence within our group. This year’s Janet Rowlands Unsung Hero Award went to: Ray Moore.

Our second Unsung Hero Award is dedicated to Jan Keirl who many of our group remember as a wonderful reassuring presence back stage during our show weeks. No request was ever a problem for Jan, she happily got on with things without batting an eyelid. Jan was a great support to many other members of our group and we remember her with great fondness. This Unsung Hero Award went to somebody who, like Jan, has a huge impact off-stage. The role that this person takes on requires many unseen hours of work months before the show.  This person spends hours of their own time, as well as being in the show itself, to prepare the visual feast that awaits the audience when the curtain opens. Their job is to prepare over 200 costumes for the show and to ensure that these costumes are cohesive and fitting. With the added stress of making sure that any costume issues are rectified during the show week itself, this person has a lot to juggle. We are grateful for this person’s input this year and were thrilled with the overall visual effect of the show, which was largely thanks to them. To achieve all of this within 6 weeks is hugely commendable. The recipient of the 2019 Jan Keirl Unsung Hero Award: Fiona Henderson.

A wyrmling is the name of a young dragon. They have many qualities that, as they grow, they develop into magnificent creatures. So what are these strengths? They have ambition, drive and dignity, they are quick to learn and fun to be around. They are unafraid of challenges, and are willing to take risks.

This award was presented to a member of our group who has embraced all of these qualities and strengths this year. At the auditions way back in May, they impressed and delighted the panel with their command of various accents, poise and delivery of characterisation. Six weeks before the show, this person took on a new role with courage, sparkle and not to mention a very convincing Scottish accent! They made the part their own with their unique flourish, courage, flair and a magical quality.

Even when song choices had to be changed just two weeks before the show, they were never daunted and went on to deliver a magnificent performance.

Our next Shining Star Award is in honour of Margaret Masters. Margaret loved Dragon Tale and Dragon Tale loved Margaret. She was one of our front of house helpers who made a real difference when welcoming the audience through the doors. She was positive, welcoming, and a real shining star. This award is for somebody who is, and has been, an integral part of our shows since she started in 2015 for Sleeping Beauty. This member of our group truly loves performing, dancing and being on stage. It has been wonderful to watch her grow and flourish as the years have progressed, and every movement, line and facial expression is considered and carefully thought out to make her character the best that it can be. She absolutely smashed it this year as one of the Undesirables, whenever you looked at her on-stage she was constantly in role and committed to her character. She earned several comments from the audience, commenting on her role within this year’s show, with the general opinion that she is definitely a ‘one to watch’ for the future. We are so happy that she is a part of Dragon Tale. This year’s Margaret Masters Shining Star Award goes to Lucy Fairlamb.

In the early days of Dragon Tale,Isabelle Frankland was a wonderful on-stage presence obtaining her fairy license in Cinderella and masterfully telling “Twas the Night Before Christmas” in A Dragon’s Christmas Present. Our younger members looked up to Isabelle as a performer that they could take inspiration from. As the oldest member of our group, we thought it only fitting to name the Newcomer Award after her. This year’s award went to somebody who came to auditions and blew us all away with her confident and powerful singing voice. Theatre and performing runs through her veins and it has been a pleasure to work with her this year. This person is always focussed when learning new routines and always remembers what she needs to do week on week. Not only that, but she is now one of our top recruiters, bringing along several of her friends to join us for Oliver! next year. She is a real ambassador for our group and we are excited to see her future performances as a Dragon. Ladies and gentlemen, the Isabelle Frankland Newcomer Award is presented to Katie Foster.

A new award for this year. We remember Garry Lathan as a committed and integral member of our backstage crew. Somebody who would do anything for anyone, and who wanted to see our group succeed in it’s early days. Presenting an award in Garry’s memory to somebody who displays these same qualities seemed perfect. The first recipient of the Garry Lathan Award was a newcomer this year. He displays a maturity beyond his years and is a real candidate to pursue a professional career in stage management. This year, he took on the huge responsibility of ‘calling the show’, a job which involves organising and signalling cues to the backstage crew, cast, lighting crew and sound crew. It is a job which requires a high degree of concentration and understanding. When our amazing stage manager was unwell during show week, this person, alongside several amazing backstage volunteers, stepped up and took the bull by the horns, and without prior experience in this role with Dragon Tale, stage managed our show. He is a real talent, and to hold the skills to be able to do this at such a young age is phenomenal. Ladies and Gentlemen, our first Garry Lathan Award was presented to Alastair Beasley.

This award is given to the person whom the committee considers embodies best the virtues of Dragon Tale.

Richard Chilton was a founder member of Dragon Tale and, like several others, graduated to us after major involvement with the Gang Shows of some years earlier.  We remember so well his playing a diversity of roles, particularly that of Farmer Johnny Bell in the first production, way back in 2000, Old Crocks, Frocks and One Smoking Dragon.  Richard was very well loved by all who were members at the time and we were very sad when he had to leave us because of ill health. He died in 2012 and is missed to this day.

So who was to receive this most worthy award?  A person who has been with us for most of the period of our existence.  She has taken a large amount of high profile work on and has always gone more than the extra mile in making everyone feel thoroughly welcome at practices.  Her vast enthusiasm and experience have been highly evident throughout. But that’s only part of the story. She has done a tremendous amount of work behind the scenes to make sure that we’ve been thoroughly prepared for each pantomime and the results have much more than justified her efforts.  She has also taken a strong lead in the social life of the group. It’s also been a great joy to us that several members of her family also joined our ranks and have continued to be with us. The 2019 Richard Chilton award, to the person who embodies best the virtues of Dragon Tale, goes to Wendy Neal.

Huge congratulations to all winners! 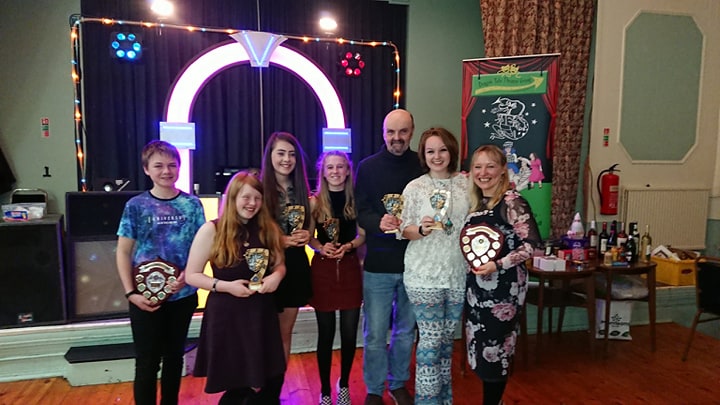